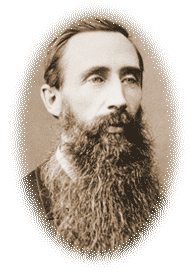 Goodloe Harper Bell, the eldest of 12 children, taught his first school at age 19. Overwork placed him in the Western Health Reform Institute in Battle Creek, in 1866, shortly after it opened. There he accepted the Seventh-day Adventist faith. Soon after his recovery in 1867, Bell started a private school for SDA children in Battle Creek. His students included William and Edson White, sons of James and Ellen White, and the Kellogg brothers, Will K. and John Harvey.

While teaching school, Bell also edited the Youth's Instructor. Beginning in 1869 he became superintendent of the Battle Creek Sabbath School, and served as General Conference treasurer between March 1870 and February 1871. He also was one of the directors of the Health Institute. On December 10, 1871, Ellen White was given a vision in which she saw "Bell in connection with the cause and work of God in Battle Creek." It is not surprising that Ellen White wrote that "more was expected of Bro. Bell than can reasonably be of any one man" (Testimony to the Church at Battle Creek, p. 8).

Bell was a strict disciplinarian, which brought both approval and criticism from parents and students. Ellen White wrote: "It is true his style is in marked contrast with the generality of teachers. But it is this kind of teaching that is needed, that will give stability to the character. The lack on the part of some of the parents to sustain Bro. Bell made his work doubly hard." But she also had correction for him: "Bro. Bell did not realize that he was depending more upon system to bring up the church of God to the right position and in working order, than to the influence of the Spirit of God upon the heart. He trusted too much to his own ability."--Ibid.

By 1872 Bell had left Battle Creek, discouraged about his reputation. But Ellen White wrote, urging him to return to teach in the school that was to open that year. On June 3, 1872, twelve students went up to the second story of the old Review print shop, where Bell welcomed them. The school was a success from the beginning, and in December 1874 it was moved to the newly erected Battle Creek College. Bell headed the English Department, under Sydney Brownsberger, president.

After Brownsberger left the college in 1881, Alexander McLearn, a new Seventh-day Adventist, succeeded him. The rules were relaxed, and Bell resisted the lack of discipline. In December 1881 Ellen White warned that the college was standing "in a position that God does not approve." Included were rebukes for both McLearn and Bell (see Testimonies, volume 5, pages 21-36).

Bell was severely treated, and left the school in the spring of 1882. Ellen White wrote a strong letter of support for Bell, and rebuke to others for how they had dealt with him. McLearn also left, and the school closed for the year. Bell went to South Lancaster, Massachusetts, where he opened a new secondary school that same year. After a one-year closure, Battle Creek College reopened, and, with the opening of Healdsburg Academy (also in 1882), the church now operated three secondary schools. In his later years, Bell started the first church correspondence school.

[Jesus] declares, "I am the way, the truth, and the life." If by any effort of our own we could advance one step toward the ladder, the words of Christ would not be true. But when we accept Christ, good works will appear as fruitful evidence that we are in the way of life, that Christ is our way, and that we are treading the true path that leads to heaven. Heaven p. 11.